This past weekend’s Sangre de Cristo men’s tournament was a meeting of six teams from around the state, with a staggered field of competition. Most tournament games ended with a clear victory, with two exceptions; a 2-2 tie, broken with kicks from the mark between East Mountain and Silver City, and the championship game of the two competition brackets between Taos and Monte del Sol which nearly went to extra time, but was closed out with a beautiful finish by Senior midfielder Ian Sanderson to take the tigers up 2-1 in the final minutes of regulation time. All teams displayed high levels of sportsmanship and competition, and all games were played on time, despite a very rainy Friday morning and afternoon.

This coming weekend the Lady Tigers get their turn. This tournament is being played in two round-robin brackets to accommodate two additional last minute teams who wanted to join the action. There are back to back games at the Eco Park field from 10am-10pm Friday August 29 and 9am-9pm on Saturday August 30. Taos will compete with Santa Fe Prep, Bernalillo, and East Mountain, while the second bracket includes Farmington, Bosque, Clovis and Silver City. Admission for the tournament is $5 per person per day, and proceeds benefit Taos High School Athletics.  Come out and roar for the Lady Tigers! 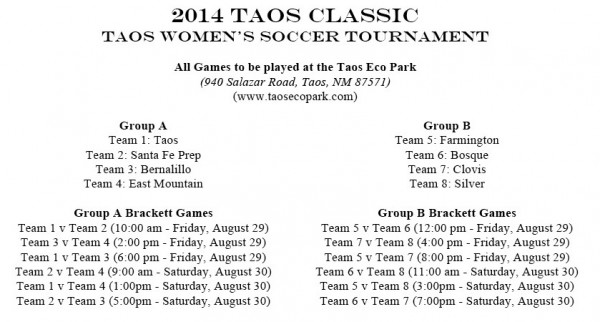