An exciting and unpredictable soccer Saturday in the park!

This past Saturday, April 16 brought together 5 soccer teams from New Mexico and Colorado to test their spring sides against the altitude and the weather. UNM Lobos and Air Force Academy was delayed by an hour. Both teams and staff took turns clearing the field surface of snow that had fallen overnight.

Taos Eco Park staff were thankful for the positive attitudes displayed by both teams in the face of difficult conditions. Once the weather gave the teams a break teams still en route or preparing to leave home were advised that matches could be played if they would make the trip. Teams were motivated despite match conditions to complete the games.

Most of the town missed out due to cooler temps and intermittent snow, but fans who did brave the weather were rewarded with exciting, hard hitting men’s soccer action. Weather notwithstanding, the teams were pleased with the scheduling of the matches and the field management and accommodation provided by the Taos Sports Alliance at the park. The snowy conditions would have made the long-planned locker room facilities and bench covers a much appreciated addition to this year’s event.

Three of this year’s four matches were abbreviated to accommodate team needs for their spring matches, the weather factored in to a shortened game for CSU Pueblo vs Air Force Academy who was trying to get back on the road immediately post match to avoid the snowy driving in the dark.

Taos News Photographers and writers Arcenio Trujillo, Gabe Winestein and Katharine Egli captured some of the incredible variety in weather and the action on the pitch Saturday in a tag-team effort to cover this event. You can read their full event and score coverage and see their images on the Taos News website. 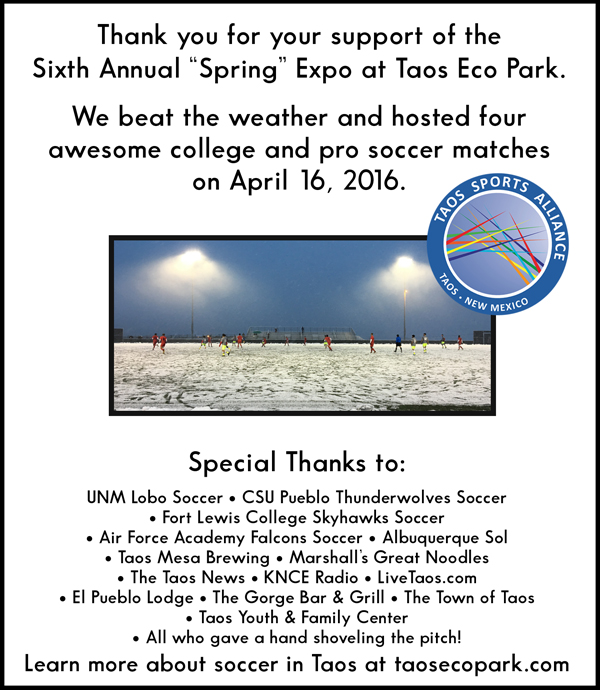