On April 29, with help from a Re-Leaf grant the Park received a much needed makeover. Leadership from the Town of Taos, along with the knowledge of Arborist Paul Bryan Jones of NM Environmental Consulting, and support from the Taos Heartwood Coalition‘s Ben Wright and Beth Enson provided the initiative to replant Taos Eco Park. With their guidance, the hands of Taos Sports Alliance‘s Caitlin Legere, Town Councilors Darien Fernandez, Fritz Hahn and Nathaniel Evans, twelve members of the Americorps youth team visiting Taos this spring, and several members of the Taos Tree Board and the appreciative public worked together for over 8 hours to plant 39 trees and shrubs which traveled north from Trees of Corrales in the area of Taos Eco Park.

The crew learned about proper tree planting techniques, and dug the holes in designated areas, removed the cages from around the root balls, placed the trees, replaced the surrounding soils, and mulched the bases so they would retain moisture more evenly. Initial 2011 plantings of mature pine and deciduous species had died due to damaged irrigation system.

Now that Town of Taos officials, working in partnership with Bob Draper’s Phoenix Mechanical, had repaired the irrigation system to that area of the park, the trees were a welcome addition. The western end of the park had become somewhat of a dustbowl, frequented by Prairie Dogs. Now established, the trees are providing some much appreciated shade and color to the area west of the championship field.

It was a rough-weather day, “drowning out” some of the potential volunteers as well as students who were supposed to come celebrate and share their Arbor Day poster designs with those assembled. Town Council member and Mayor Pro-Tem Judy Cantu read an Arbor Day Proclamation to the group in honor of the tree planting. Heartwood Coalition provided snacks and drinks for volunteers and also did a volunteer raffle in which folks were able to go home with Aspen and Doug Fir seedlings, young apple trees, flowering shrubs, succulents and more. 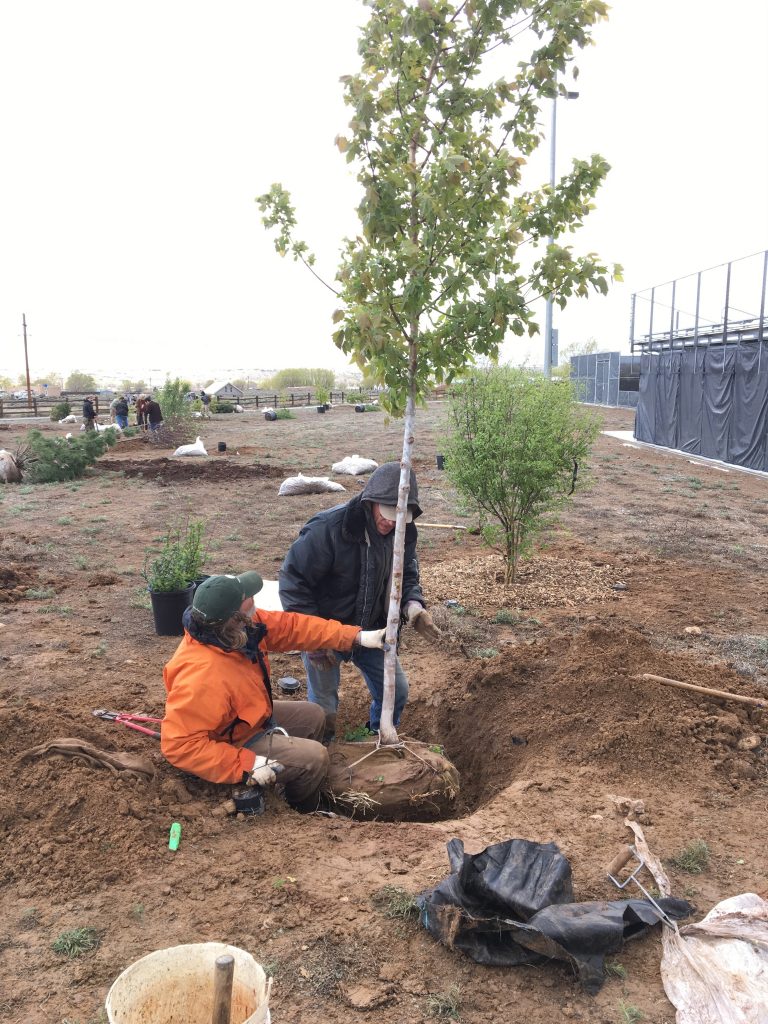 See the following file with information on the varieties planted at the park, to find out which ones are which and have a little scavenger hunt!